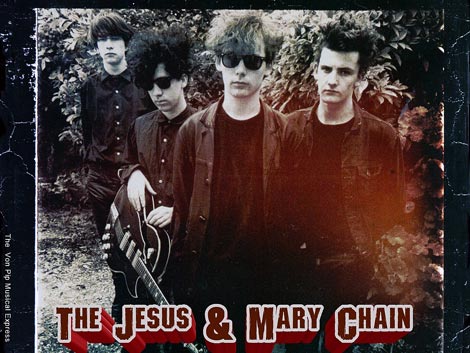 “All Things Must Pass” By The Jesus And Mary Chain

Any new Mary Chain news in these here parts is good news and Jim Reid recently recorded an hour long special with Matt Everitt for  BBC 6 Music to discuss his life , career and the musical influences that shaped the Jesus And Mary Chain.  It’s part of the station’s ‘First Time’ series  and will be broadcast on  Sunday (7th November) at 12.00. You can listen again on-line for 7 days following broadcast. See link below.

Jim also features in “Upside Down”,  a documentary charting the history of Creation records, which also ties in with the release of a wonderful 2-disc retrospective-   “Upside Down-The Best Of The Jesus And Mary Chain” .

We have been given exclusive permission to stream one of the tracks from compilation (see above),  a studio recording of “All Things Must Pass” originally released  on the soundtrack album for  the NBC television  show,  Heroes.  It’s also the first new song to be released by the Jesus and Mary Chain since 1998.

Well last Christmas Jim adopted the mantle of an indie Val Doonican for our Christmas special and shared some of his fave tracks with us (HERE .)  And in October this year we interviewed Jim ( HERE ), with regard to the 25th Anniversary of  their classic “Psychocandy“ album.

The delightful “God Is In The TV” webzine also asked us if we’d like to contribute to their “Touchstone Albums Of The 80’s “ series. There of course could only be one…..

The Vaseline’s recent song “I Hate The 80’s’ certainly resonated with me, the eighties were for me, generally ‘shit.’ Greed, consumerism, Thatcher, ostentatious fashion, Stock Aitkin and Waterman, ozone shredding hair styles, Live Aid, Thatcher, yuppies, Thatcher, the horrific omnipresent gurning visage of Phil Collins, I could go on… Anyone who tells you it was any different wasn’t actually there. The post punk promise of the early eighties soon evaporated to make way for bands dressed up as if they’d covered themselves in super glue and ram raided a fancy dress shop. Their music wasn’t much better, producing the sort of soulless whine that would one day find its spiritual home as incidental music on a DFS commercial (alongside Martin Kemp!!) The sight of these prancing preening peacocks on TOTP’s was a spirit crushing affair; it really felt like punk had never happened and the old order wasted little time in re-establishing itself as a purveyor of all things shite.

Despite the occasional shaft of light from the likes of The Cure, the Bunnymen, the Smiths, and some fantastic Indie labels, it wasn’t until 1985 that a band emerged who put the excitement back into an increasingly flaccid music scene. Two Scottish brothers broke cover from their bedroom studio with a collection of incendiary songs and a début album that was destined to be a classic, no, no, I’m not talking about the Proclaimers , I refer to Jim and William Reid, The Jesus and Mary Chain and their seminal album ‘Psychocandy’ .

These boys were not only writers of melodious pop, but true iconoclasts who had a deep understanding of rock n roll history and it’s mythology. Taking Phil Sectors’ musical template the Reid’s beat the living shit out of it, fusing distortion with melody, brutality with tenderness. I suppose to describe an album as ‘influential’ is fatuous unless you qualify that assertion, I mean I’m sure Haircut 100 *influenced* people of no fixed musical taste, but let’s face it they were complete guff and besides it’s *who* and *what* you influence that matters. So forget the riots and violence of the Mary Chain’s early shows, that was merely a distraction, a media circus, and should not obfuscate the influence and impact ‘Psychocandy’ had. It made white noise acceptable, and it’s effect was huge and wide ranging paving the way for many bands who are now regarded as musical deities. 25 years on since its release ‘Psychocandy’ is still regarded as a defining moment in 1980’s indie guitar music and regularly appears in ‘best ever’ albums list.

If you still haven’t heard the album you really should remedy the situation forthwith, it’s a timeless album *from* the 80’s but not really *of* the 80’s . It still sounds as wonderful today as it did way back in 85, truly a classic.